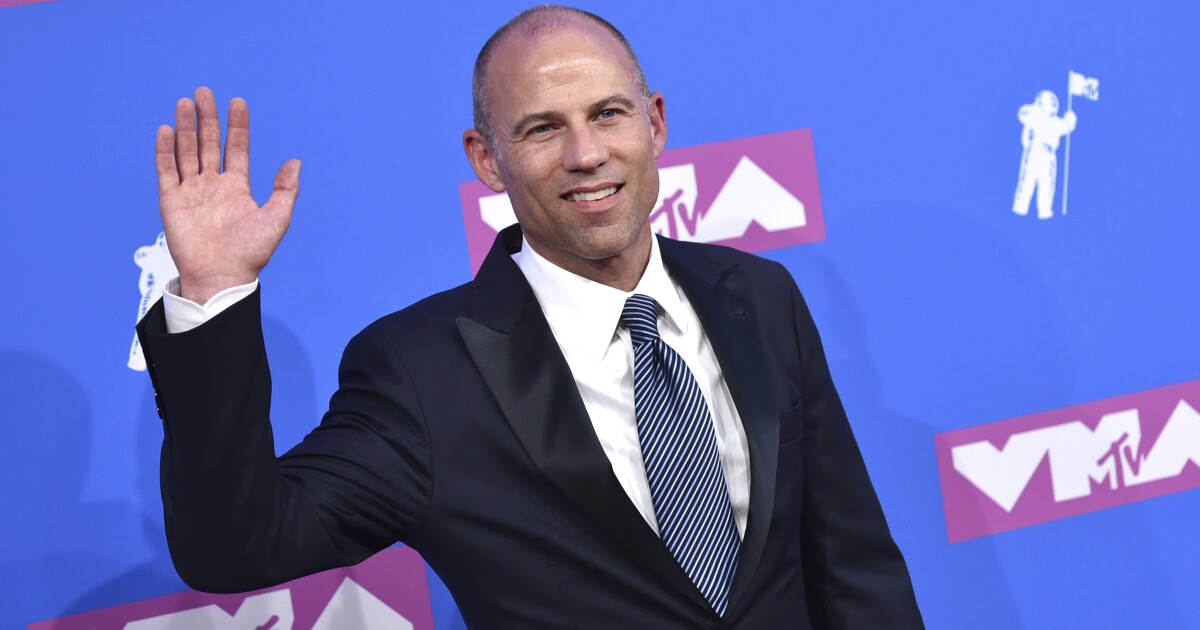 Michael Avenatti's fall from grace will continue Thursday, as the man who rose to prominence as Stormy Daniels's lawyer, and was even touted as a possible Democratic presidential candidate, will be sentenced to prison after a jury found him guilty of extorting Nike.

“While the defendant may have tried to hide behind legal terms and a suit and tie, the jury clearly saw the defendant’s scheme for what it was — an old fashioned shakedown,” Geoffrey Berman, then the U.S. attorney for the Southern District of New York, said after his February 2020 guilty verdict.

Avenatti burst on the scene with his “Basta” catchphrase in March 2018 through his representation of Daniels, a pornography star whose real name is Stephanie Clifford and who alleged in a lawsuit she had been paid $130,000 in hush money by Michael Cohen, the onetime personal lawyer of former President Donald Trump, in October 2016 ahead of his election victory over Hillary Clinton. Avenatti soon built a massive “Resistance Twitter” fan base and became a fixture on cable news. Trump denied an affair with Daniels, and Cohen contended he used his own money to facilitate Daniels's payment.

A federal judge tossed a separate defamation lawsuit by Daniels against Trump in October 2018, and Daniels contended Avenatti had filed the defamation suit against her wishes. The Superior Court of California separately ruled in August 2020 that “Stephanie Clifford shall recover $44,100 in attorney’s fees against defendant Donald J. Trump.”

Daniels, whom prosecutors believe was defrauded by Avenatti, posted on Instagram in February 2020, saying: “Sadly, it appears that what Michael Avenatti did to me was just the tip of the iceberg of deceit. I am not surprised his dishonesty has been revealed on a grand scale.”

Avenatti's legal team argued last month that their client should only receive six months in prison, lamenting, “He cannot go anywhere in public without inducing and subjecting himself to vitriolic comments and abuse.”

The Justice Department said in June that the probation office recommended a sentence of eight years, with prosecutors asking the court to “impose a very substantial sentence.” Avenatti was allowed out of the Manhattan Metropolitan Correctional Center in April 2020 due to coronavirus fears.

The FBI recorded Avenatti in March 2019 demanding millions of dollars from Nike’s lawyers and appearing to threaten to hurt the company, saying, “I’m not f***ing around with this, and I’m not continuing to play games. … You guys know enough now to know you’ve got a serious problem. And it’s worth more in exposure to me to just blow the lid on this thing. A few million dollars doesn’t move the needle for me. I’m just being really frank with you. … And I’ll proceed with my press conference tomorrow, and I’ll hang up with you now, and I’ll call the New York Times, who are awaiting my call. … I’ll go take $10 billion off your client’s market cap.”

Avenatti was arrested and charged in March 2019. Prosecutors said he tried to extort at least $22.5 million from the sporting apparel company by claiming he would hand over evidence on improper behavior by Nike employees related to the recruitment of college basketball players, but warning he would release the information to damage Nike’s value if they refused.

Avenatti was indicted on 36 counts of fraud, perjury, embezzlement, tax evasion, and other financial crimes by the U.S. Attorney for the Central District of California. Avenatti was also accused of embezzling nearly $2 million from his client, NBA player Hassan Whiteside of the Miami Heat. The fraud accusations included stealing from his clients and using the money to pay for personal expenses, including a $4.5 million jet he co-owned before it was seized.

Avenatti was also sued in June 2019 in California by a paraplegic former client, Geoffrey Johnson, who accused Avenatti of stealing from a $4 million settlement he won in 2015. Johnson was seeking at least $9.5 million from Avenatti and others.

Avenatti denied any wrongdoing in all cases.

The conservative Media Research Center said in April 2019 that, beginning in March of the prior year, Avenatti had appeared on CNN 122 times, 108 times on MSNBC, and twice on Fox News.

Daniels announced in March 2019 that she was ditching Avenatti as her lawyer, contending that the attorney did not treat her “with the respect and deference an attorney should show to a client.”

Prosecutors in Manhattan alleged in May 2019 that Avenatti forged Daniels's signature on a document instructing her literary agent to divert money from her to his own account before he spent the money on his own personal and business matters, such as the lease of a Ferrari, hotels, airline tickets, and dry cleaning. Avenatti helped Daniels negotiate an $800,000 total advance for her memoir Full Disclosure, released in October 2018, for which Avenatti wrote the foreword. Avenatti is accused of embezzling portions of the last two parts of the advance payment, allegedly diverting nearly $300,000 to his own account.

Avenatti tweeted at the time, “No monies relating to Ms. Daniels were ever misappropriated or mishandled.”

Avenatti’s law firm was also hit with a $10 million bankruptcy court judgment in May 2018. The Los Angeles Police Department announced that he was arrested on suspicion of domestic violence in November 2018, though in February 2019, a spokesman for the Los Angeles City Attorney’s Office said it declined to file charges. The California State Bar recommended in June 2019 that Avenatti’s law license be involuntarily enrolled as inactive.

Before it all came crashing down, Avenatti was treated like a mini-celebrity at the White House Correspondents' Association dinner in April 2018 and appeared on the red carpet at the MTV Video Music Awards in August 2018.

Avenatti told Politicon in October 2018 that “if you want to take this nation back, you’re going to have to engage in a brutal campaign.” Avenatti delivered the keynote speech at the Democratic Wing Ding in Iowa in August 2018, receiving huge applause and an ovation in the first-in-the-nation caucus state, telling the crowd, “We must be a party that fights fire with fire. … When they go low, I say hit back harder.” The lawyer made several other appearances at Democratic events in 2018 as Democrats considered who could take on Trump in 2020.

Avenatti ruled out a presidential bid in December 2018, promising to “continue to represent Stormy Daniels and others against Donald Trump and his cronies.” But Avenatti said in August 2019 that the chances he would hop into the Democratic primary were “50/50.” He said: “I have the name ID, and everyone knows I’m one of the few effective fighters that the Dems have.”

Avenatti told the Washington Examiner in August 2019 that if he decided not to join the race, he would consider running against “that putz [Donald Trump, Jr.] in 2024.”

“I’m very serious [about running], Brian, and I’m getting more serious by the week. … The fact of the matter is, and people may not like this, and we can have a debate as to whether it’s good for America or not, but we live in a different media age, a different realm if you will, and whoever is going to aspire to the presidency is going to need to understand what that realm entails and how to navigate it.”

Stelter replied, “I don’t know if it’s a good thing that star power and TV savvy is required for the job, but I think it is. And by the way, I think President Obama also had a lot of TV star power, and that helped him pre-Trump. But Trump is more evidence of this. And looking ahead to 2020, one reason why I’m taking you seriously as a contender is because of your presence on cable news.”

After Avenatti’s indictment, Stelter defended his comments in May 2019, saying, “My thesis back then, which still holds, is that all future U.S. presidents will be television stars of some sort. TV star power will be a prerequisite for the presidency. … Obviously, I’m not taking him seriously anymore, but I own that comment. He showed a Trump-like mastery of the media last year.”

Stelter was hardly alone in helping Avenatti raise his profile.

Former Trump campaign CEO Steve Bannon went on HBO’s Real Time with Bill Maher in September 2018, and both men seemed impressed with Avenatti. Maher said, “He could be the Trump of 2020. The guy who’s the outsider who like blows through the regular politicians because he looks different and he’s got balls.” Bannon claimed, “I’ve not done any due diligence on this guy, but I’m telling you, he’s got a fearlessness, and he’s a fighter. … I think he’ll go through a lot of this field if he decides to stick with it like a scythe through grass. … I’ve always said it’s going to be someone like Oprah or an Avenatti or somebody who’s more media savvy.”

Adam Parkhomenko, a Clinton campaign veteran and former DNC national field director, argued in October 2018 that Avenatti would be a great nominee, telling the Washington Examiner, “He's kind of like Teflon. … There are a lot of campaigns that aren’t effective, don’t fight back, and just hire a bunch of their friends. He’s doing everything he needs to do to flip a light switch if he decides to run.”

Avenatti also disastrously injected himself into the confirmation process for then-Supreme Court nominee Brett Kavanaugh, with his client, Julie Swetnick, issuing a baseless sworn declaration that “I witnessed Brett Kavanaugh consistently engage in excessive drinking and inappropriate contact of a sexual nature with women during the early 1980s.” Kavanaugh quickly denied the claims, comparing it to something “from the Twilight Zone.”

NBC News interviewed Swetnick in October 2018 and reported that she “back-tracked on or contradicted parts of her sworn statement” and that the outlet “found other apparent inconsistencies in a second sworn statement from another woman whose statement Avenatti provided.”

Then-Senate Judiciary Committee Chairman Chuck Grassley said he “referred Julie Swetnick and her attorney Michael Avenatti to the Justice Department for criminal investigation relating to a potential conspiracy to provide materially false statements to Congress and obstruct a congressional committee investigation” in October 2018, and the Iowa Republican followed up on that with the DOJ and FBI this March, saying, Avenatti “may have criminally conspired to mislead the Committee regarding those allegations and obstruct its investigation” related to Kavanaugh, who was confirmed to the highest court in the land.