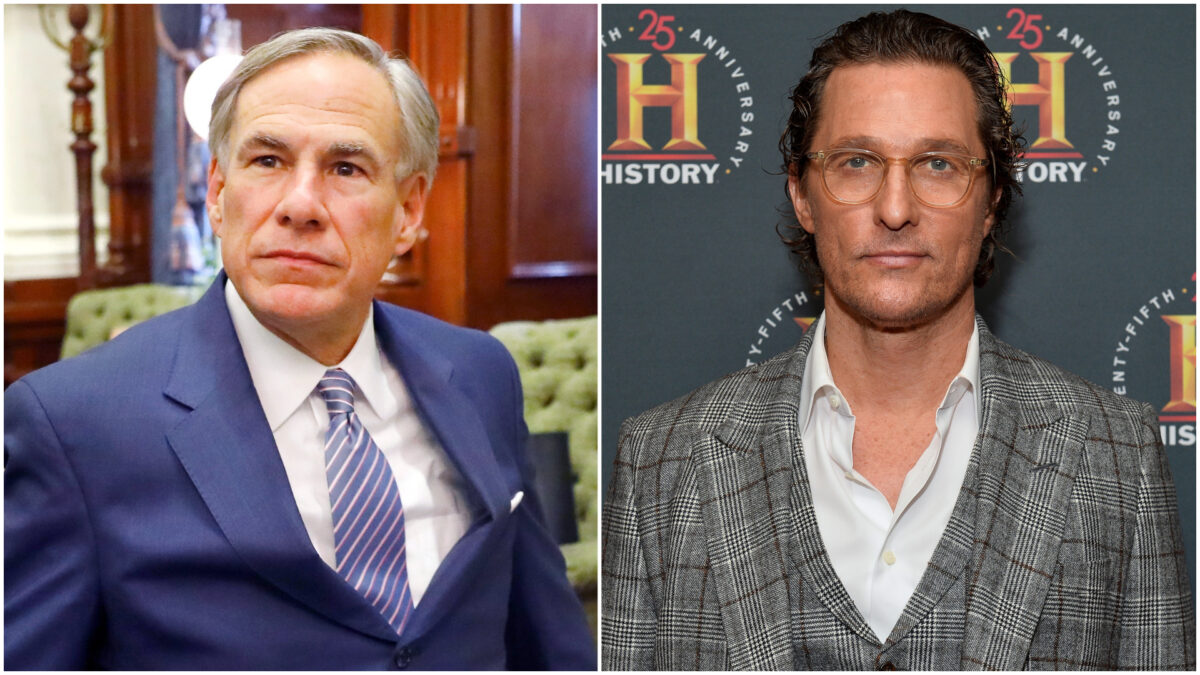 Abbott, a Republican, is up for a third term and has already secured the endorsement of former President Donald Trump. Hollywood actor McConaughey is not yet officially running for Texas governor, but said in March that he is seriously considering doing so.

“It doesn’t matter what the name is, I take everybody very seriously, and it shows,” Abbott told Fox News Sunday. “I will tell you two things, and that is if you look at my polling numbers, they are very, very strong. In addition to that, I have $55 million in the bank already, and I’m a very aggressive fundraiser.”

His remarks followed a poll by The Dallas Morning News and the University of Texas at Tyler that showed the Republican governor with a lead of just one point over McConaughey. It found that 39 percent of registers voters in the Lone Star State back Abbott, while 38 percent of respondents said they would back the actor over Abbott.

“So, I will have the resources and the backing of a lot of people across the state of Texas to ensure that whoever decides to run against me, we will be able to win,” the governor added.

The same poll shows that Abbott holds a 12 percent lead over potential Democratic candidate Beto O’Rourke, who is yet to rule out a gubernatorial bid.

In announcing a potential run for Texas governor in March, McConaughey, whose home state is Texas, said he would adopt an “aggressively centric” approach if he were to run.

“I would say, as far as running, I’m not until I am. So my decision hasn’t changed because I’m still not. Am I giving it honest consideration? Yeah,” the actor told the Austin American-Statesman in March. “I’d be a fool not to. And it’s an honorable consideration. I still have to answer the same question for myself and my family: Honestly, is that the truest and best category for me to be most useful? I’m ready to step into a leadership position in this next chapter of my life but I don’t know that that’s in politics.”

He said at the time that politics is “a broken business” and portrayed himself as a “free agent” who could bring an outsider’s perspective to the political arena.

Meanwhile, retired U.S. Army Lt. Col. Allen West, a Republican, who until recently had served as chairman of the Texas Republican Party, has said he is also running for the position.

Endorsing Abbott for reelection on June 1, Trump, in a statement circulated by his Save America political action committee, praised the governor’s policies on the U.S. southern border, the Second Amendment, and election integrity.

“Greg Abbott is a fighter and a Great Governor for the incredible people of Texas,” the former president said. “No Governor has done more to secure the Border and keep our communities safe than Governor Abbott. Greg is a staunch defender of the Second Amendment and has made Texas a Second Amendment Sanctuary State.”

In response, Abbott said Trump is a “great friend of Texas.”

“I am proud of the work we have done together to secure our border, bring more jobs to Texas, and protect the freedoms that make America and Texas great-and we are just getting started. I thank President Trump for his leadership, and I will continue to fight for the values that make Texas the greatest state in America,” Abbott said in a statement the same day.