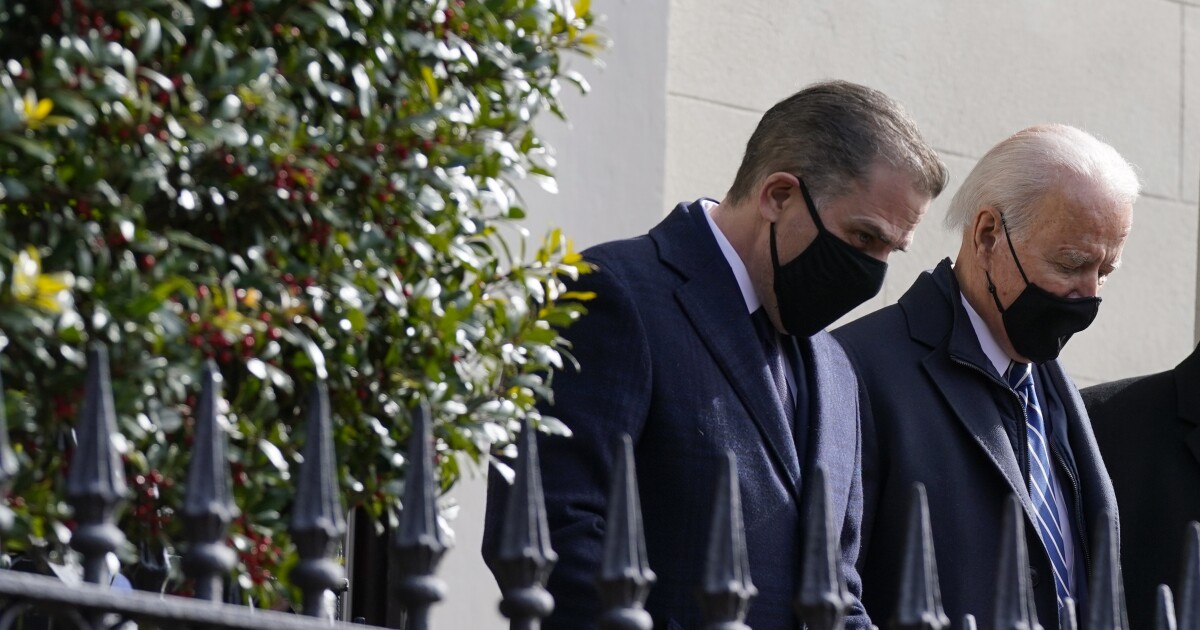 The White House dismissed concerns about President Joe Biden being aware of his son's foreign business pursuits, alleging such claims come from “Rudy Giuliani’s lawyer” despite indications on Hunter Bidens's laptop and in his own book he may have been trading on access to his father.

A New York Post reporter noted on Friday that Joe Biden asserted in September 2019 he had “never spoken to my son about his overseas business dealings.” The reporter said that in 2015, then-Vice President Biden “met at Cafe Milano with his son’s Ukrainian, Russian, and Kazakhstani business associates one day before a Burisma executive thanked the first son for the opportunity to meet his father” and “hosted at the Naval Observatory Mexican business associates of Hunter Biden.”

The reporter asked if Joe Biden was really unaware his son was pursuing business deals with the people he’d allegedly met.

Earlier this year, the Daily Mail reported emails showing Hunter Biden organizing an April 2015 dinner at Georgetown's Café Milano with a guest list including many international figures, including Kazakh businessmen, Burisma adviser Vadym Pozharskyi, and Elena Baturina. A GOP report concluded in September that Hunter Biden has “received a $3.5 million wire transfer from Elena Baturina, the wife of the former mayor of Moscow.”

A March email from Hunter said of the dinner, “Dad will be there but keep that btw us for now.” Hunter wrote in a March 20, 2015, email about a potential guest list, including “3 seats for our KZ [Kazakh] friends” and “2 seats for Yelena and husband” as well as one for “Vadym” and “3 Ambassadors (MX??)” — apparent shorthand for Mexico.

Pozharskyi sent Hunter an email on April 17, 2015, saying, “Dear Hunter, thank you for inviting me to DC and giving an opportunity to meet your father and spent [sic] some time together.”

The White House did not respond to the Washington Examiner’s questions in June about whether now-President Biden attended the dinner.

Joe Biden's presidential campaign denied the meeting took place based on “Biden’s official schedules from the time.” However, former senior advisers later conceded, “It's technically conceivable that Pozharskyi would have approached Biden on the sidelines of some broader U.S.-Ukraine event.”

Emails from 2014 obtained by the Washington Examiner document conversations between Hunter Biden, his Rosemont Seneca business partner and fellow Burisma board member Devon Archer, and Pozharskyi. The trio discussed plans to seek an energy deal with the then-prime minister of Kazakhstan, Karim Massimov.

The New York Post also reported that “among more than 100 events scheduled in Hunter’s diary at the VP’s residence at the Naval Observatory in Washington, DC, there are meetings which appear to overlap with Hunter’s business interests,” including one titled “Breakfast with Dad — NavObs” from Nov. 19, 2015.

The outlet said “five photographs date-stamped on that day and taken at 10:03 a.m. and 10:04 a.m. appear on the laptop, showing Joe posing with four of Hunter’s business associates, including Mexican billionaires Carlos Slim and Miguel Velasco.” The report said, “Jeff Cooper, a longtime Biden family benefactor, also appears along with Hunter… Cooper and Hunter had been working on energy deals in Mexico and elsewhere in Latin America.”

Hunter Biden admitted the laptop allegedly dropped off for repairs at a Delaware repair shop could be his but said he doesn’t remember. He also said it could have been stolen, he could have been hacked, or Russian intelligence could have been involved without providing any evidence.

In his memoir, Beautiful Things, Hunter wrote that in 2013, the then-vice president asked his teenage daughter to join him on Air Force Two to Japan and then to Beijing, where he met with Xi Jinping. Hunter Biden said he tagged along. At the time, Hunter Biden was working with Archer, and “our deal with the biggest potential was a partnership with a Chinese private equity fund seeking to invest Chinese capital in companies outside the country.”

He wrote: “While we were in Beijing, Dad met one of Devon’s Chinese partners, Jonathan Li, in the lobby of the American delegation’s hotel, just long enough to say hello and shake hands. I was meeting with Li as a courtesy call while I was in the country; the business deal had been signed more than a week earlier. Li and I then headed off for a cup of coffee.”

Despite offering no proof, Joe Biden’s 2020 campaign and many in the media dismissed the laptop story as Russian disinformation operation. However, then-Director of National Intelligence John Ratcliffe said the laptop was not a Russian intelligence effort.

The laptop was given to the repair shop in April 2019, according to John Paul Mac Isaac, the store's owner. The laptop and hard drive were seized by the FBI through a grand jury subpoena in December 2019. Giuliani, then-personal lawyer to Trump, obtained one copy of the hardware's contents, and the data was shared with various media outlets.

Hunter has reportedly been under criminal investigation as far back as 2018 as federal authorities scrutinize his taxes and foreign business dealings.