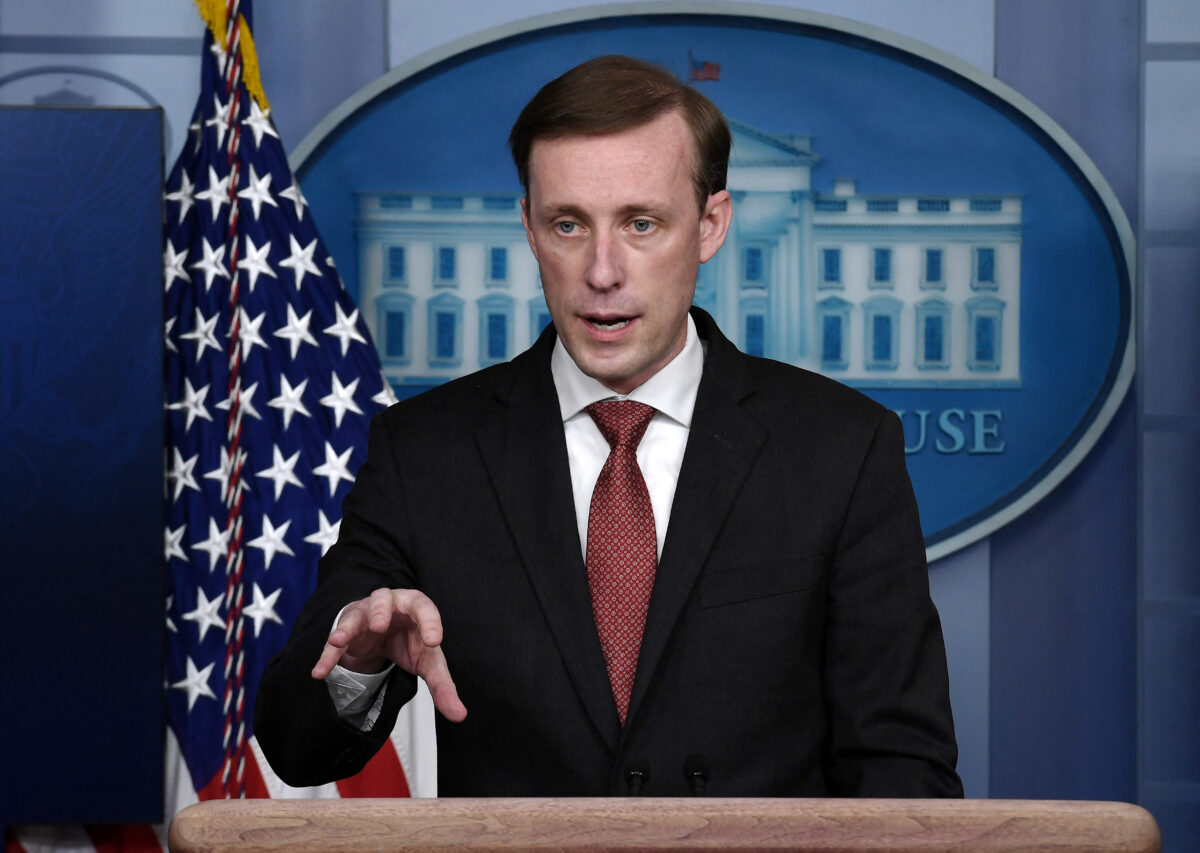 National security adviser Jake Sullivan said Sunday he “can’t make any guarantees” that terrorist groups like al-Qaida and ISIS won’t see a resurge once U.S. forces withdraw from Afghanistan in the coming months.

Sullivan made the remarks in response to questions from Fox News Sunday host Chris Wallace, who cited pushback to President Joe Biden’s decision to pull out the remaining 2,500 to 3,500 U.S. troops by Sept. 11.

“Senate Republican Leader Mitch McConnell says that we’re opening the door for the Taliban to come back and raising the possibility that so will terror groups like ISIS and al-Qaeda,” Wallace said, playing a clip of McConnell arguing that Biden’s decision was “gift-wrapping” the country for terrorists.

“I can’t make any guarantees about what will happen inside the country. No one can,” Sullivan said.

While insisting that the Biden administration will not be sending troops back to Afghanistan, Sullivan said the Pentagon wouldn’t be taking its “eye off the ball.”

“We have the capacity, from repositioning our capabilities over the horizon, to continue to suppress the terrorist threat in Afghanistan,” Sullivan said.

Biden’s decision to withdraw the remaining troops drew a mixed reaction on Capitol Hill and from security experts.

Senate Minority Leader Mitch McConnell (R-Ky.) called it a big mistake and “a retreat in the face of an enemy,” while Sen. Lindsey Graham (R-S.C.) said it was “dumber than dirt and devilishly dangerous.”

William Burns, the recently confirmed director of the CIA, told lawmakers last week, on the same day Biden announced the withdrawal plans, that, “there is a significant risk once the U.S. military and the coalition militaries withdraw.”

“The U.S. government’s ability to collect and act on threats will diminish. That’s simply a fact,” he said, cautioning that al-Qaida and ISIS in Afghanistan “remain intent on recovering the ability to attack U.S. targets, whether it’s in the region, in the West or ultimately in the homeland.”

Some Democrats have also taken a critical position on the withdrawal.

Sen. Jeanne Shaheen (D-N.H.), argued the decision could embolden the Taliban to destabilize the country.

“I’m very disappointed in @POTUS’ decision to set a Sept. deadline to walk away from Afghanistan. Although this decision was made in coordination w/our allies, the U.S. has sacrificed too much to bring stability to Afghanistan to leave w/o verifiable assurances of a secure future,” Shaheen wrote on Twitter after Biden’s announcement.

Other Democrats, including Sen. Elizabeth Warren (D-Mass.), applauded the move.

“President Biden recognizes the reality that our continued presence there does not make the U.S. or the world safer,” Warren wrote in a statement. “Year after year, military leaders told Congress and the American people that we were finally turning the corner in Afghanistan, but ultimately we were only turning in a vicious circle.”

Democrat-allied Sen. Bernie Sanders (I-Vt.) also hailed the move as “the brave and right decision to withdraw U.S. troops from Afghanistan and bring an end to the longest war in our country’s history.”

Secretary of State Anthony Blinken, in an interview on ABC on Sunday, defended the withdrawal, saying that shifting priorities and a dispersed terrorist threat justify the pullout.

“The terrorism threat has moved to other places, and we have other very important items on our agenda, including the relationship with China,” said on ABC’s “This Week.”

The notion of a more dispersed threat landscape was echoed by Director of National Intelligence Avril Haines, who told lawmakers last week that the danger posed by Afghanistan has been eclipsed by threats from countries such as China, which she called an “unparalleled priority.”

Biden, in announcing the withdrawal, said: “After consulting closely with our allies and partners, with our military leaders and intelligence personnel, with our diplomats and our development experts, with the Congress and the vice president, as well as with [Afghan President Ashraf Ghani] and many others around the world, I concluded that it’s time to end America’s longest war.”