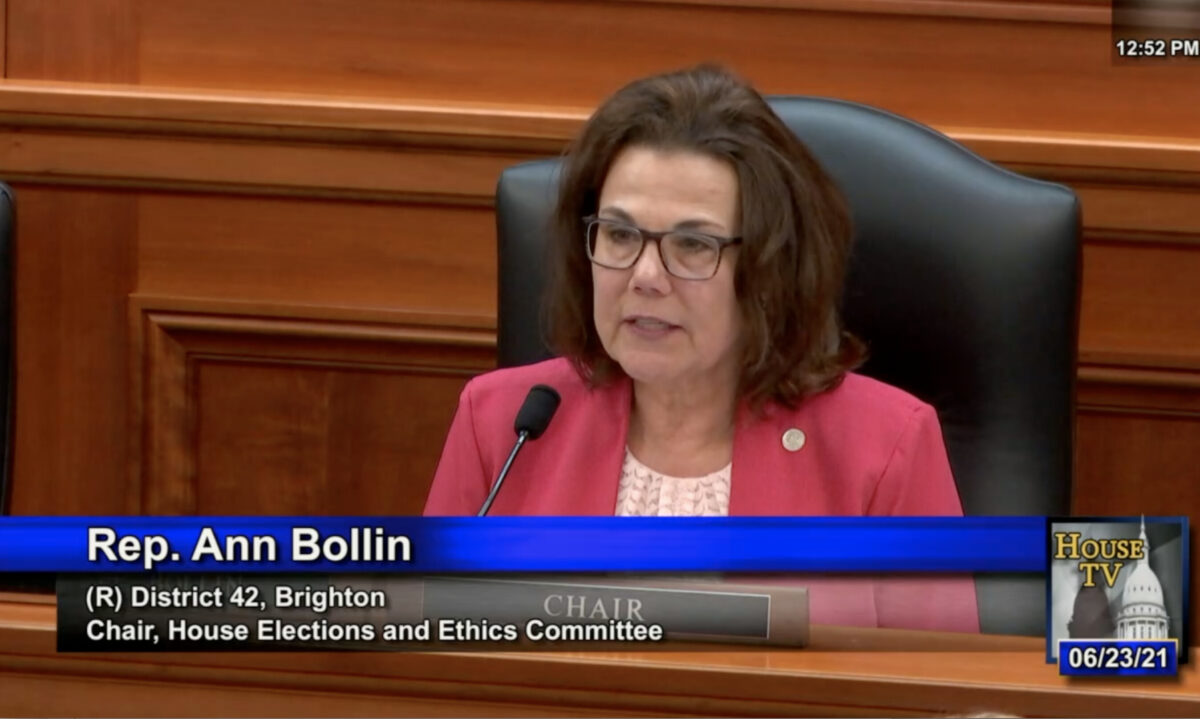 The Michigan House of Representatives adopted bills that would improve photo ID verifications and provide more transparency to the elections process. All Michigan citizens would have access to free state photo IDs across the state. Every eligible voter would be able to vote with a photo ID regardless of their income.

An Epoch Times reporter interviewed state Rep. Ann Bollin, the Chair of the Michigan House Elections and Ethics Committee, about the difference between the current poll laws and the new bills.

The new election reform bills require a voter who votes in person to present a photo ID. The signature on the ID would be matched with the signature in an electronic poll book, which is available at the precinct.

“You don’t even have to show proof of income to obtain an ID. Before this, the poll laws said you can get a free ID, but you’d have to prove that you’re poor. This doesn’t call for any proof of economic status, providing access to free IDs for all Michiganders. We will be able to ensure people across the state are not hindered from wasting their vote at the ballot box,” Bollin said.

If a voter does not have an ID with them for whatever reason, they can still vote with a provisional ballot under the new bills.

“It would be tabulated roughly 7 days after the election, upon which time that voter had 6 days to bring in the proper identification information to the local clerk. And once provided with that, then the provisional ballot is pre-certified, that their credentials are adequate, and the ballot is then tabulated in the form of a provisional ballot,” Bollin explained.

According to the current Michigan poll laws, anyone without an ID can vote in a polling station by signing an affidavit to attest to their identity. That vote will be counted immediately once the ballot is tabulated.

If a vote is an ineligible one, no one can recount the vote once it is in the machine, Bollin pointed out. “There are no safeguards to ensure the voter without an ID is actually the registered voter in the system.”

Opponents of the new ID bills believe blacks, the elderly, minorities, and low-income people would be disproportionately affected by enhanced voter ID laws because they may have difficulty in obtaining state IDs.

There will be funds allocated to distribute free state IDs to all Michigan citizens who need an ID.

“There would be an appropriation of $1 million to help the Secretary of State offer free IDs to Michigan citizens regardless of income,” Bollin said of the new bills. “The Secretary of State in the state of Michigan has already indicated that over 150,000 Michiganders do not have an ID. And she has suggested that she wants to take her mobile units to areas where people might not have IDs. This will allow her to mobilize all over the state to provide free IDs to people.”

The process of tabulating the provisional ballots would be conducted by people from both parties.

In the past, provisional ballots were counted by the local clerk’s office in a closed process conducted by two people; the clerk and an assistant. Some clerks are appointed by a party, not elected, so the clerk could be of a particular party affiliation.

“Now, the Board of Canvassers will be responsible for tabulating the provisional ballots while maintaining the secrecy of the vote. The process will be conducted in a more transparent and open process by people of both parties,” Bollin concluded.

What is the next step?

“Now it’s in the Senate’s hands. So, the Senate can either concur and vote on it, and it goes to the governor, or they make more changes and return it to the House,” Bollin said.

“As Chair of the House Elections Committee, we are working very diligently to strengthen our elections and add voter confidence to our elections process,” Bollin continued. “My goal is to put good policy on the governor’s desk. And I am 100% committed to making sure that every Michigan voter that is eligible can vote freely, equally, independently, and securely.”