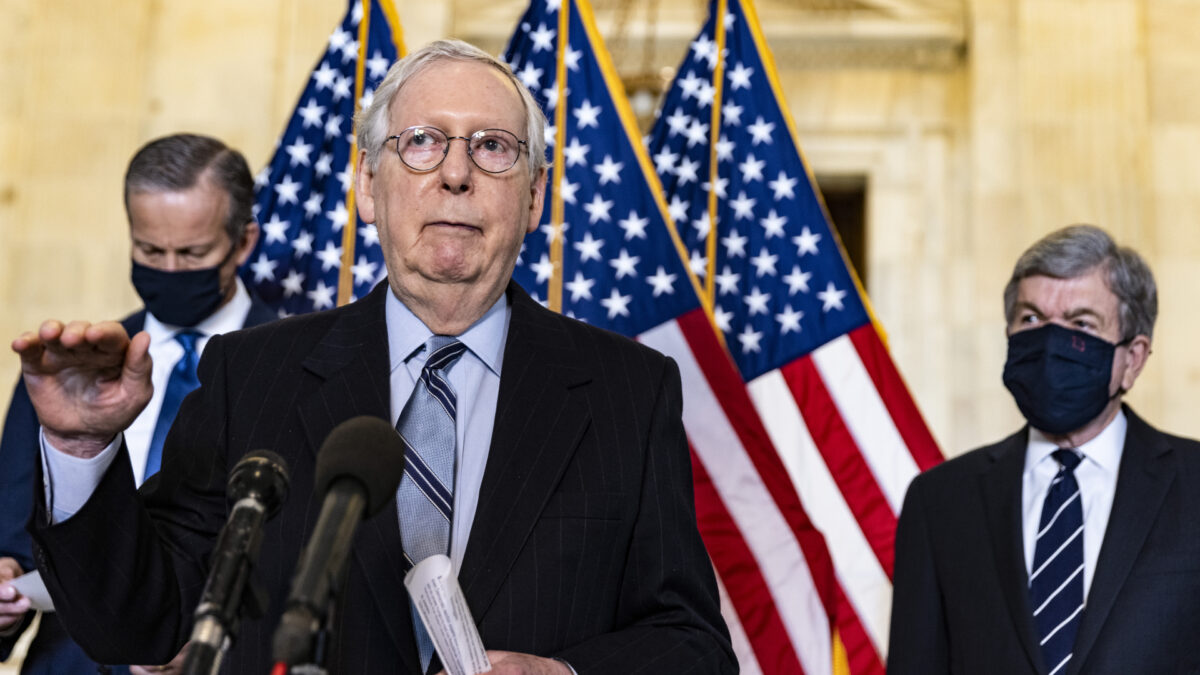 Senate Minority Leader Mitch McConnell (R-Ky.) said on Tuesday that Republicans would be unlikely to support a stand-alone bill addressing the issue of people living illegally in the United States after entering as children, nicknamed “Dreamers,” unless the legislation takes a broader swipe at resolving the border crisis.

McConnell made the remarks at a Senate Republican leadership news conference, during which he blamed President Joe Biden’s messaging on the border and immigration reform for the surge in illegal immigration.

“Well, all I can tell you is that everybody is sympathetic with the DACA issue,” McConnell said, referring to the Deferred Action for Childhood Arrivals program, an Obama-era framework that protects Dreamers from deportation.

“But, as a practical matter, given the crisis at the border … I can’t imagine that we would take up an immigration-related bill, no matter how worthy it might be … without insistence on our part that we address the obvious crisis at the border that is directly related to what appeared to be an invitation by the new President to come on up,” McConnell added.

McConnell’s comments on Republicans being unlikely to back stand-alone legislation echoed remarks made by Sen. Lindsey Graham (R-S.C.), who along with Sen. Dick Durbin (D-Ill.) introduced the Dream Act of 2021 in February, proposing a pathway to lawful permanent residency and American citizenship to people without lawful status who were brought to the United States as children.

“For years, I have supported a solution for the Dream Act population who were brought to the United States by their parents as minors,” Graham said in a statement. “I do not believe this legislation will pass and be signed into law as a stand-alone measure. I believe it will be a starting point for us to find bipartisan breakthroughs providing relief to the Dreamers and also repairing a broken immigration system,” Graham said, adding that he looks forward to working with Durbin and others to “find a way forward.”

Durbin, who is leading bipartisan talks on the matter, told reporters last week that he thought any agreement on the DACA issue would need a border security component to get enough GOP buy-in to clear the Senate filibuster.

McConnell’s remarks also come as the GOP has intensified its criticism of the Biden administration for its handling of the border surge, which in the month of March saw Border Patrol apprehend 172,000 illegal immigrants, the most in a single month in 20 years, according to statistics released on April 8 by U.S. Customs and Border Protection (CBP).

A coalition of Republican senators who recently visited the southern border wrote a letter to President Joe Biden on Monday, urging him to take swift action and reverse his policy decisions that they say have caused the border surge.

Republican lawmakers have long argued that the burgeoning crisis is a result of Biden’s move to overturn several Trump-era immigration policies that helped curbed the flow of illegal border crossings. This includes his predecessor’s cornerstone Migrant Protection Protocol, which effectively ended the problematic “catch and release” policy, significantly stemming the surge of illegal immigrants that were seen at the southern border in 2019.

The Biden administration has repeatedly said it inherited a broken immigration system that will take some time to fix, while blaming the border surge on seasonal factors and on dire conditions in immigrants’ home countries. Part of Biden’s strategy is to address the “root causes” of migration by providing aid to Central America.

White House press secretary Jen Psaki acknowledged last week that the administration had not anticipated the influx of illegal border crossings following its policy changes but continued to downplay the severity of the situation by insisting that the situation at the border was not a “crisis.” Her comments came after Biden, in a rare admission, used the word “crisis” to refer to the surge of unaccompanied minors at the border.

The DACA program, meanwhile, has for years been a hot-button issue. It was created by an executive order signed in 2012 by former President Barack Obama, following failed immigration reform negations on Capitol Hill.

Many conservatives, including former President Donald Trump, have argued DACA is unconstitutional, although Trump expressed sympathy for the Dreamers’ plight and indicated openness to a negotiated, bipartisan solution.

Trump tried to end the DACA program in 2017, saying at the time that winding it down would provide Congress a “window of opportunity” to act on the issue, but bitter partisan divisions over immigration meant that never happened.

DACA defenders say that the recipients should not be faulted for their parents’ decision to violate U.S. immigration laws to bring them into the country. They argue that there would be a number of social and economic costs should the program end. They say many of these recipients have contributed to the U.S. economy and removing the program would threaten the nation’s future workforce and impose massive costs to employers who currently employ these people.

For DACA opponents, the case represents an overreach of executive authority and a usurpation of Congress’s lawmaking powers. They have argued that Obama exercised unlawful executive authority to create the program and that only Congress can enact such a policy under its authority over immigration matters.

Opponents have also taken issue with the fact that DACA grants benefits to these recipients ahead of other immigrants who are toiling through legal channels to gain immigration and naturalization in the United States.

Janita Kan contributed to this report.