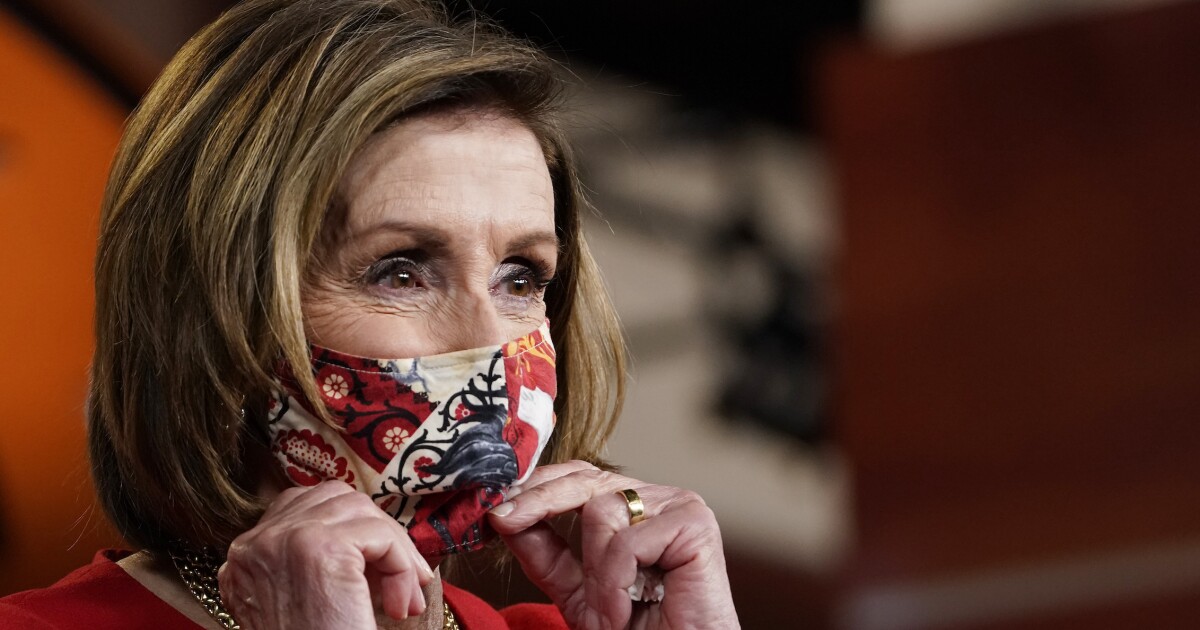 The announcement Thursday by the Centers for Disease Control and Prevention dropping mask requirements for vaccinated people has stirred more partisan acrimony in the House, with Republicans eager to ditch face coverings mandated by Democratic Speaker Nancy Pelosi.

The mask fight is the latest in a series of events that has further split the two parties to the point that new partisan ethics complaints are flying and the idea of working together on major legislation seems far out of reach.

Shortly after CDC officials dropped the mask requirement in an afternoon press conference Thursday, dozens of House Republicans wrote to Pelosi demanding she do the same in the House, where masks have been mandatory since July 30, 2020.

“The United States Congress must serve as a model to show the country we can resume normal life through vaccination,” the letter, spearheaded by Rep. Bob Gibbs, an Ohio Republican, said. “Let’s follow the science and get back to work.”

But Pelosi is refusing to drop the mask mandate, citing Brian Monahan, the attending physician for the Congress.

She told lawmakers in a memo Friday masks must be worn on the House side of the Capitol until all lawmakers and floor staff are fully vaccinated.

“Returning the Capitol to the welcoming and safe venue that it has been requires us to not only secure it physically but to make it safe from the virus,” Pelosi wrote to lawmakers.

Pelosi’s announcement prompted immediate derision from the GOP, which argued the mask mandate would undermine the CDC guidance and send the signal to people watching that the vaccines are ineffective.

More than 75% of House lawmakers have been vaccinated, according to recent data provided by Capitol medical staff. About 32% of people in the United States are fully vaccinated, although the national number climbs to more than 70% for those older than 65.

In a heated floor exchange Friday afternoon, Rep. Drew Ferguson, a Georgia Republican and a physician, told Democrats that prolonging the mask policy is “committing public health malpractice by saying if you get the vaccine, it doesn’t work.”

Republicans said it would be impossible to determine if all lawmakers and floor staff are vaccinated without violating medical privacy laws.

Pelosi recently softened the mandate, and lawmakers are now allowed to remove masks while speaking at the House lectern.

The mask battle inflames an already acrimonious relationship between House Republicans and House Democrats, and it has bled into the House Ethics Committee, which, in the past, has received very few member-led complaints.

On Friday. Rep. Rodney Davis, an Illinois Republican, filed an ethics complaint against Rep. Mikie Sherrill, a New Jersey Democrat, and dozens of other Democrats, accusing them of “making false, spurious and unsubstantiated accusations against GOP lawmakers.”

The complaint stems from Sherrill’s public statements accusing Republicans of plotting ahead of time with the Jan. 6 rioters by allowing them inside the Capitol a day earlier.

Sherrill also sent a letter to the U.S. Capitol Police in January, demanding information about the visitors in the Capitol on Jan. 5, who, she said, “appeared to be associated,” with former President Donald Trump’s Jan. 6 rally that preceded the riot at the Capitol.

The letter is signed by dozens of fellow Democrats.

The Sherrill letter “is not a petty political spat between Republican members and Rep. Sherrill and her Democratic colleagues,” Davis wrote to the Ethics Panel. “It is a public allegation of a crime.”

Democrats are launching their own ethics complaints against the GOP.

On Thursday, Pelosi took the unusual step of publicly calling on the Ethics Committee to open an investigation into the actions of Rep. Marjorie Taylor Greene, a Georgia Republican.

Greene confronted Rep. Alexandria Ocasio-Cortez in the hallway outside the House Chamber and demanded the New York Democrat publicly debate her on policy issues.

Greene berated Ocasio-Cortez after she refused to engage and was walking away. Ocasio-Cortez called Greene “deeply unwell” and said the lawmaker “clearly needs some help.”

The House Chamber is now secured with metal detectors requested by Democrats who fear Greene or fellow Republican freshman Lauren Boebert, a Colorado gun rights advocate, will carry a weapon onto the House floor and use it on one of them.

The exterior of the Capitol remains ensconced in 8-foot, non-scalable fencing that was put in place after Jan. 6. Democrats have refused to remove the fencing, despite bipartisan complaints. Thousands of National Guard troops remain on patrol at the Capitol, although their numbers have been greatly scaled back since the 25,000 initially deployed after Jan. 6.

On Friday, media outlets began reporting Biden’s plan to drop the indoor mask mandate in federal buildings for those who are vaccinated.

But Pelosi controls the House and can keep the mandate in place within the House side of the Capitol.

Rep. Louie Gohmert, a Texas Republican, accused Democrats of playing politics with the fencing, ethics complaints, and mask mandate that she has been subtly blaming on unvaccinated Republicans.

“We want people to think there’s this grave, grave danger here,” Gohmert said. “Apparently, the No. 1 goal here in the House is something referred to as optics.”