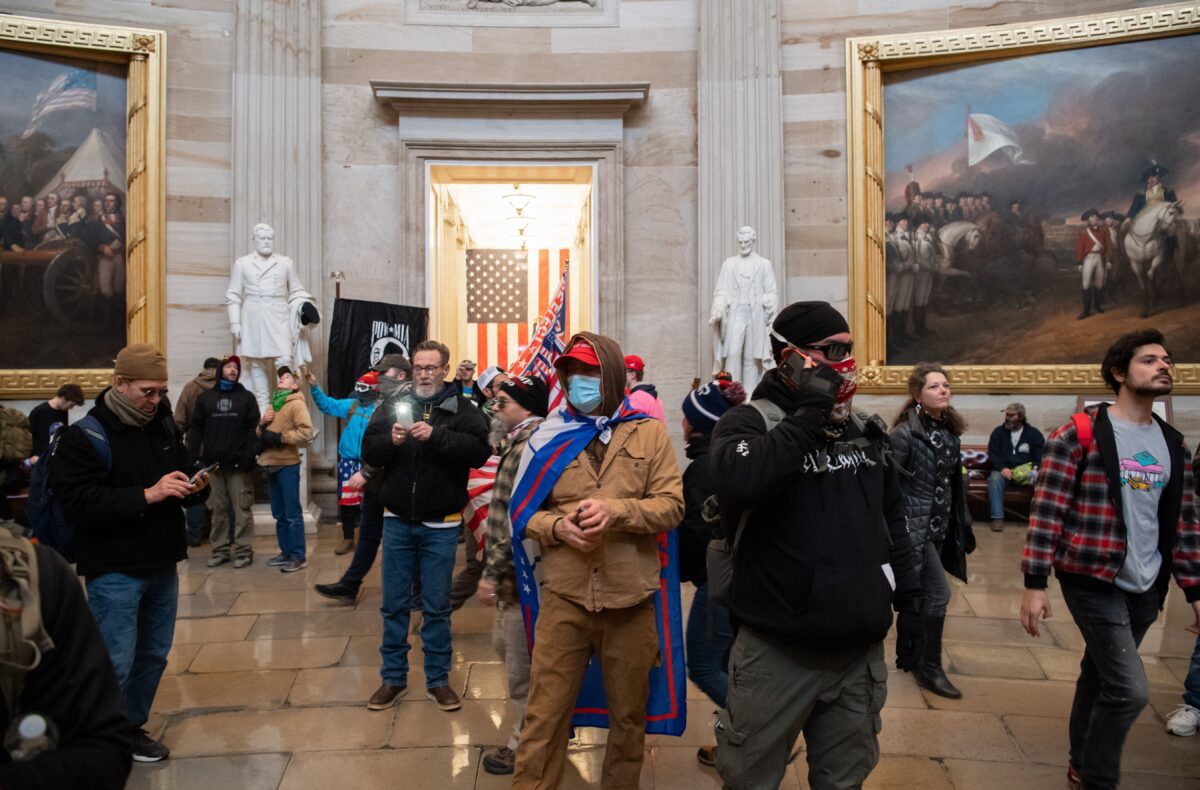 Two high-profile conservative legal activists claim the Department of Justice (DOJ) is using a double standard in its treatment of those detained regarding the Jan. 6 breach of the Capitol, compared to those who were arrested during the rioting following the death of George Floyd in Minneapolis in 2020.

More than 500 individuals have been arrested by federal authorities and charged with multiple serious offenses in connection with the events of Jan. 6, 2021, dozens of whom remain in jail awaiting trial.

Nearly the same number of people were arrested during the June 2020 protests of the Floyd death around the White House and nearby areas of downtown Washington, D.C., according to the Associated Press.

Those disturbances were among the dozens that rocked major U.S. cities, but most of the arrests were for minor offenses such as curfew violations and failure to disperse, AP said. Few of them were jailed following their arrests.

But attorneys for a dozen of the Jan. 6 detainees claim their clients are being subjected to unconstitutional civil liberties violations, including unjustified solitary confinement, being deprived of private conversations with their attorneys, lack of needed medical care, and terrible sanitary conditions. The detainees are being held in facilities of the District of Columbia Department of Corrections.

The DOJ has repeatedly declined The Epoch Times’ requests for comment on the conditions being experienced by the Jan. 6 detainees.

Regardless of any particular detainee’s guilt or innocence, all of them have the same constitutionally guaranteed civil rights as every other American citizen, American Constitutional Rights Union (ACRU) President Lori Roman told The Epoch Times July 6.

“It is common knowledge that Washington, D.C. has one of the most lenient arrest and release systems in the country. We saw this clearly during the destructive 2020 riots when almost all felony charges were dropped and those arrested were released without bail,” Roman said.

“When compared to the treatment of those arrested on Jan. 6, it appears there is a two-tiered justice system that offers up different penalties based on the viewpoints of the accused. And that is unacceptable in America,” Roman said.

“Generally speaking, it looks like the targets of the Justice Department investigation on Jan. 6 are being treated differently from others who committed similar acts,” Fitton told The Epoch Times Tuesday.

“The Justice Department uses these prosecutions to intimidate and coerce the political opposition to the Biden administration and the Left’s narratives, so that doesn’t go to the innocence or guilt of any individuals or their treatment.

“But when you treat this whole process as a vehicle for political retribution, obviously, you have situations where individuals are victimized, defendants who would have otherwise been treated fairly.”

Fitton emphasized that he does not know the facts about each individual detainee’s situation, but he said he is “not aware of any allegations if made in other circumstances that would have been met by deafening silence by the chattering classes and the allegedly watchdog media.”

Fitton’s Judicial Watch focuses on Freedom of Information Act (FOIA) litigation “to investigate and uncover misconduct by government officials and litigation to hold to account politicians and public officials who engage in corrupt activities.”

Attorney Andrew Fleishman agreed that the allegations about the Jan. 6 detainees, if true, “are very serious. People have a right to access to counsel and if the jail is denying them the right to speak privately with their attorneys, that’s a major concern.”

Fleischman pointed out that “even at Gitmo, it became a major concern when it came out that some of those conversations were being recorded. So even when we deal with the most serious cases in the most constitutionally questionable circumstances, people need their rights to confide in their lawyers.”

He was referring to the U.S. military base at Guantanamo Bay, Cuba, where captured terrorists were held following the 9/11 attacks in New York City, Washington, D.C., and Shanksville, Pennsylvania.

The Atlanta attorney also emphasized that “I don’t know if these claims are true, but they should be taken seriously and examined.”

Fleischman is an appellate expert with the Atlanta firm of Ross & Pines who specializes in “seemingly hopeless cases.”

Fleischman and other criminal defense attorneys interviewed by The Epoch Times said conditions in jails across the country often fail to meet the standard established by the Eighth Amendment’s guarantee against “cruel and unusual punishment.”

Gregg Doucette, a Raleigh, North Carolina-based criminal defense attorney, told The Epoch Times that “the conditions the Jan. 6 arrestees describe are typical for jails and prisons both, in both the federal and state/county/municipal systems.”

He attributed the problem to the fact that “generations of politicians from both parties have led us here, to the point where courts have even on occasion held that detention conditions violate the Eighth Amendment’s prohibition of cruel and unusual punishments.”

Joseph McBride, attorney for Richard Barnett, the Jan. 6 protestor seen in news photos with one foot on Speaker of the House Nancy Pelosi’s desk, noted, however, that his client is a pre-trial detainee, not a convicted criminal.

That difference is crucial, McBride said, because federal bail laws and case precedents mandate that liberty prior to a trial is the standard, while detention before trial is an exception, and that no punishment is constitutional prior to conviction.