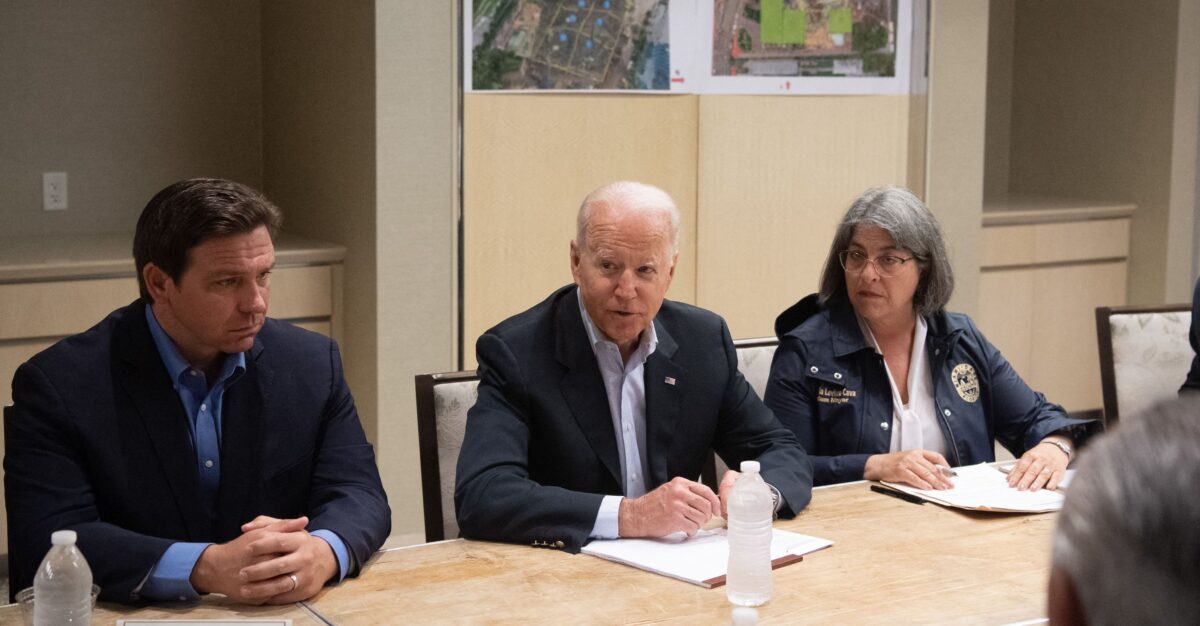 President Joe Biden visited Surfside, Florida, on Thursday about a week after a condominium tower collapsed and met with Florida Gov. Ron DeSantis, who lauded the federal government’s response in a rare bit of praise for the administration.

As the two sat for a briefing near the deadly disaster site, DeSantis, who was seated near Biden, said the president “recognized the severity of this tragedy from day one, and you’ve been very supportive.”

“You guys have not only been supportive at the federal level,” DeSantis added, “but we’ve had no bureaucracy.”

In dealing with the Federal Emergency Management Agency (FEMA), DeSantis told Biden that “we’re literally getting requests routed from local to state to federal in no time.”

Biden, meanwhile, told Florida officials that the federal government intends to pick up “100 percent of the costs” incurred for the federal and state response to the partial collapse.

“I think there’s more we can do, including I think I have the power, and we’ll know shortly, to be able to pick up 100 percent of the costs for the county and the state over the first 30 days. I think I’m quite sure I can do that,” Biden said Thursday.

Biden, whose visit to Surfside was the first time he’s visited Florida since becoming president, added that there will be “a lot of pain and anxiety and suffering and even the need for psychological help in the days and months that follow … so, we’re not going anywhere.”

His remarks came as the massive search-and-rescue effort of the Champlain Towers South was halted Thursday over concerns that the remainder of the structure would collapse. Earlier, officials confirmed that at least 18 people died and more than 140 people remain missing.

The exchange between DeSantis and Biden is notable because the Republican governor may be a possible 2024 presidential contender. Biden said during a news conference in March that he is planning to run again amid speculation and concerns about his health and relatively advanced age.

While the meeting was cordial and collaborative, both Biden and DeSantis have lobbed critical comments at one another and their policies in recent months—namely on COVID-19 policies and vaccination mandates.

But the president during the meeting attempted to underscore the importance of Democrat and Republican elected officials collaborating together during crises.