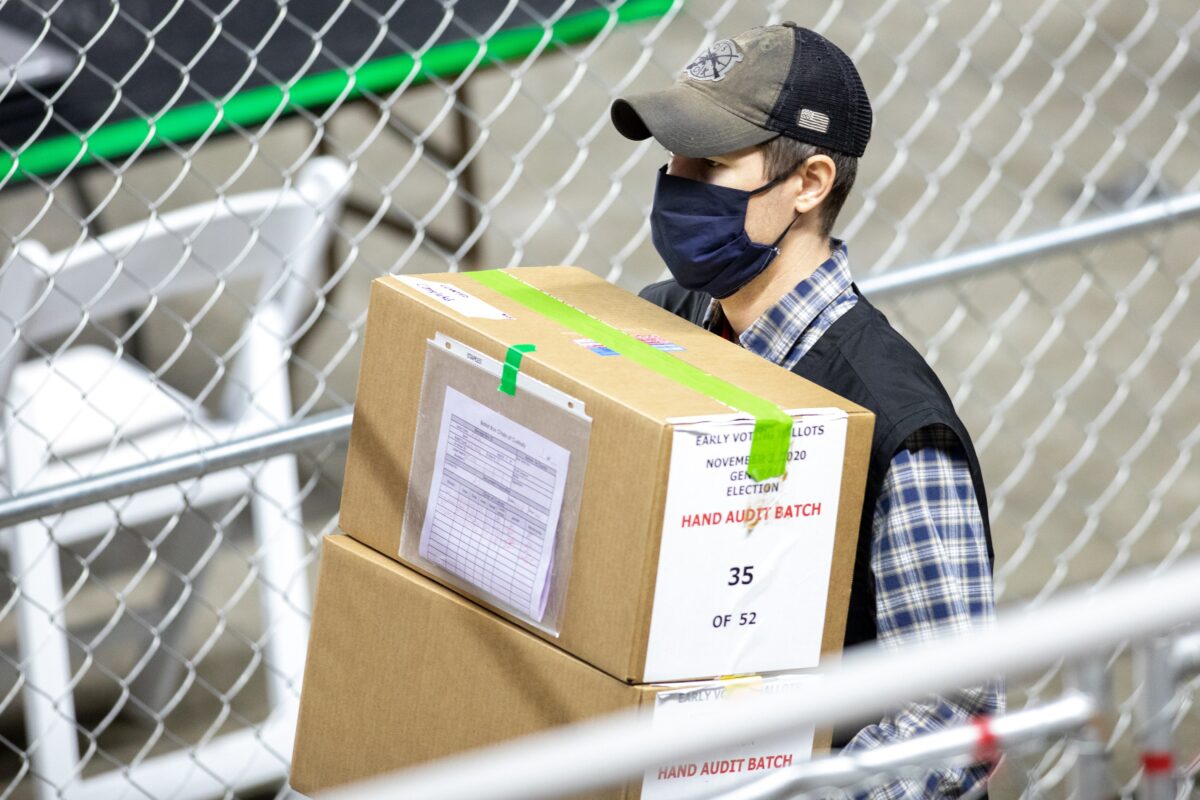 Arizona’s Senate has backed off from its threat to subpoena Maricopa County officials, instead asking them to voluntarily appear at a meeting next week to answer questions about “serious issues” that have been uncovered by a 2020 election audit.

Arizona Senate President Karen Fann, a Republican, asked Maricopa County Board of Supervisors Chairman Jack Sellers, also a Republican, on Wednesday to cooperate with the Senate to resolve the issues, including the county’s noncompliance with earlier subpoenas.

The county is refusing to supply routers or even images of routers used in connection with last year’s election, claiming doing so would pose a security risk. A Senate lawyer said last week the body would issue fresh subpoenas unless the requested material was produced, but instead Fann wrote a letter to Sellers seeking to convince him to cooperate voluntarily.

Fann is proposing having CyFIR, one of four firms hired to carry out the audit in Maricopa County, review virtual images of the relevant routers in county facilities with representatives from the county’s sheriff’s office present.

“Such an arrangement would permit Maricopa County to retain custody and monitor the review of router data, while ensuring that the Senate may access the information it requires—and to which it is constitutionally entitled—to successfully complete its audit. The Senate has no interest in viewing or taking possession of any information that is unrelated to the administration of the 2020 general election,” she wrote in the new letter.

Fann also expressed concern that the county either does not have or will not provide passwords to access administrative functions on vote tabulation machines. She told Sellers that “it strains credulity to posit that the County has no contractual right to obtain (i.e., control of) password information from Dominion.”

Auditors, the top senator continued, have “become aware of apparent omissions, inconsistencies, and anomalies relating to Maricopa County’s handling, organization, and storage of ballots.” That includes a lack of chain-of custody documentation for the ballots; bags in which the ballots were stored not being sealed; and a disparity between the actual number of ballots in a batch and the total listed on a pink report slip accompanying the batch, which the county provided.

In one case, the discrepancy was 35 votes. Batches are supposed to contain 200 ballots.

Additionally, the audit teams found an entire database directory deleted from an election machine even though the details appear to have been covered by the subpoena. Combined with not finding the main database for the election management software, “this suggests that the main database for all election related data for the November 2020 General Election has been removed,” Fann said.

She told Sellers that she hopes the issues can be resolved without additional subpoenas and invited him and any other county officers or employees who know about the outlined matters to attend a meeting at the Arizona State Capitol on May 18. The hearing will be live-streamed.

“I’m looking forward to the County coming to the AZ Capitol to answer these important questions related to the audit,” state Sen. Warren Petersen, a Republican, said in a statement.

Maricopa County, its Elections Department, Sellers, and a Sellers aide did not immediately respond to requests for comment.

The county has said its own machine forensic audit, carried out by Pro V&V and SLI Compliance in February, uncovered no issues. A hand count on Nov. 4, which reviewed two percent of ballots cast on Election Day and one percent cast early, yielded a 100-percent match to the results produced by the tabulation equipment.

“The County’s two independent audits have already shown there was no foul play in the 2020 General Election,” Sellers, the board chairman, said in a statement last week.

The current audit is looking at machines and all of the nearly 2.1 million ballots cast in Arizona’s largest county in the election.

Democrats tried stopping the audit, alleging security and privacy issues, but were rejected by a judge. Democrats eventually reached a settlement with the state Senate. Arizona Secretary of State (SoS) Katie Hobbs, a Democrat, has accused the Senate and its contractors of violating the agreement. The Senate has said it is not.

“This is really dangerous to our democracy. This is a group of people who are clearly partisan. It is headed by a company that has no auditing or election experience and they’re making up the rules as they go along,” Hobbs said on “The Daily Show” on Wednesday.

Hobbs announced earlier in the day that observers from her office found a WiFi router connected to the audit servers, adding, “There’s no way to ensure that ballot images, vote counts, and perhaps voter data weren’t connected to external networks or the Internet.”

But the team led by one of her predecessors, Ken Bennett, a Republican who is the Senate’s liaison for the audit, said no wireless was ever enabled.

“This was explicitly explained to the SoS observers on site,” the team said. “We are open to providing all passwords and access needed for a forensic investigation of the router if requested.”