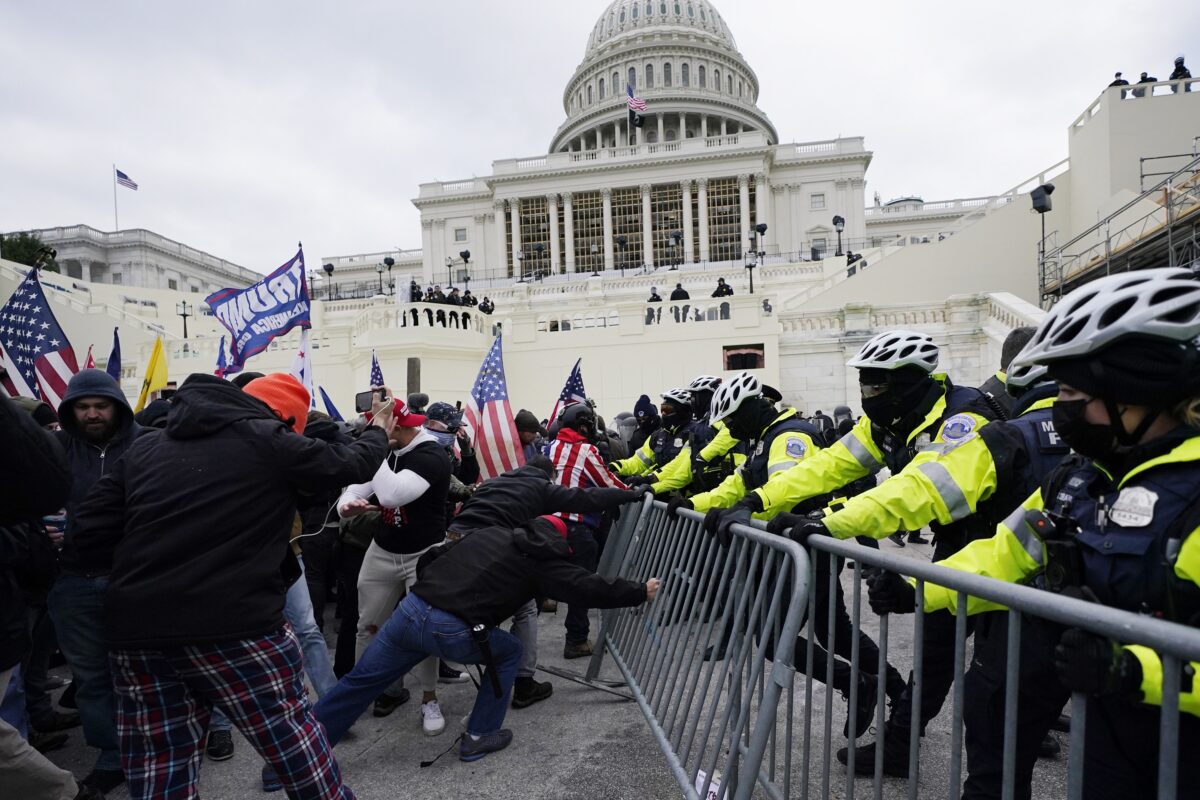 A federal appeals court on Wednesday upheld the pretrial detention of a Capitol breach suspect largely on the basis of his past history of “violent language” though he did not commit acts of violence, potentially making it harder for other defendants accused in connection with the Jan. 6 incident to secure release ahead of their trials.

The U.S. Court of Appeals for the D.C Circuit on July 7 upheld a lower court ruling ordering the pretrial detention of Timothy Hale-Cusanelli, who faces both felony and misdemeanor charges in connection with the Jan. 6 incident, including for allegedly entering a restricted building and disorderly conduct, though he is not accused of committing violent acts.

In an opinion (pdf), Judge Robert Wilkins said that the appeals court concluded that the non-violent nature of Hale-Cusanelli’s alleged offenses weighed “just slightly” in favor of release, as did his lack of criminal history, but that this was outweighed by factors including “overwhelming” evidence against him in the case, as well as a “well-documented history of racist and violent language” and that he “has been generally engaged in hateful conduct, if not necessarily violent conduct.”

Wilkins, an appointee of former President Barack Obama, said in the opinion that while “the court observed ‘we don’t typically penalize people for what they say or think,'” it nevertheless determined that Hale-Cusanelli posed a danger to the community “given all of the violent language … previously mentioned” and so should remain in pretrial detention.

On April 2, Hale-Cusanelli moved for reconsideration of his detention order in light of the district court’s decision in a case involving a mother and son, Lisa Eisenhart and Eric Munchel, who entered the Capitol on Jan. 6 but did not engage in violence. In that decision (pdf), Wilkins and other district court judges found that Eisenhart and Munchel should not be detained pending trial and that a lower court exaggerated the pair’s ongoing danger.

“In our view, those who actually assaulted police officers and broke through windows, doors, and barricades, and those who aided, conspired with, planned, or coordinated such actions, are in a different category of dangerousness than those who cheered on the violence or entered the Capitol after others cleared the way,” Wilkins wrote in the opinion in the Eisenhart and Munchel case.

But in Wednesday’s opinion, Wilkins clarified that the earlier ruling in Eisenhart and Munchel should not be understood as a blanket endorsement for the release from pretrial detention of Capitol breach suspects solely based on the fact that they did not engage in violence. Rather, Wilkins noted that each case should be considered individually to assess whether a given defendant poses a risk to the community.

“The point of Munchel was that everyone who entered the Capitol on January 6 did not necessarily pose the same risk of danger and the preventive detention statute should apply to the January 6 defendants the same as it applies to everyone else, not that the January 6 defendants should get the special treatment of an automatic exemption from detention if they did not commit violence on that particular day,” Wilkins wrote in Wednesday’s opinion.

It is unclear how the district court’s new ruling might affect other Capitol breach defendants, with several dozen remaining in pretrial custody of the more than 535 arrested and charged in connection with the incident.

It comes as former President Donald Trump on Wednesday spoke at a press conference at his Bedminster golf club in New Jersey, criticizing how Capitol breach defendants were being treated.

“People are being treated unbelievably unfairly,” Trump said. “When you look at people in prison and nothing happens to Antifa and they burned down cities and killed people,” he said, referring to last summer’s unrest in the wake of the police-custody death of George Floyd.

“There were no guns at the Capitol,” Trump said, “except for the gun that shot Ashli Babbitt,” referring to the military veteran shot and killed by a Capitol police officer during the Jan. 6 incident.

At the same time, two high-profile conservative legal activists are claiming the Department of Justice (DOJ) is using a double standard in its treatment of Capitol breach suspects, compared to those who were arrested during last summer’s riots.