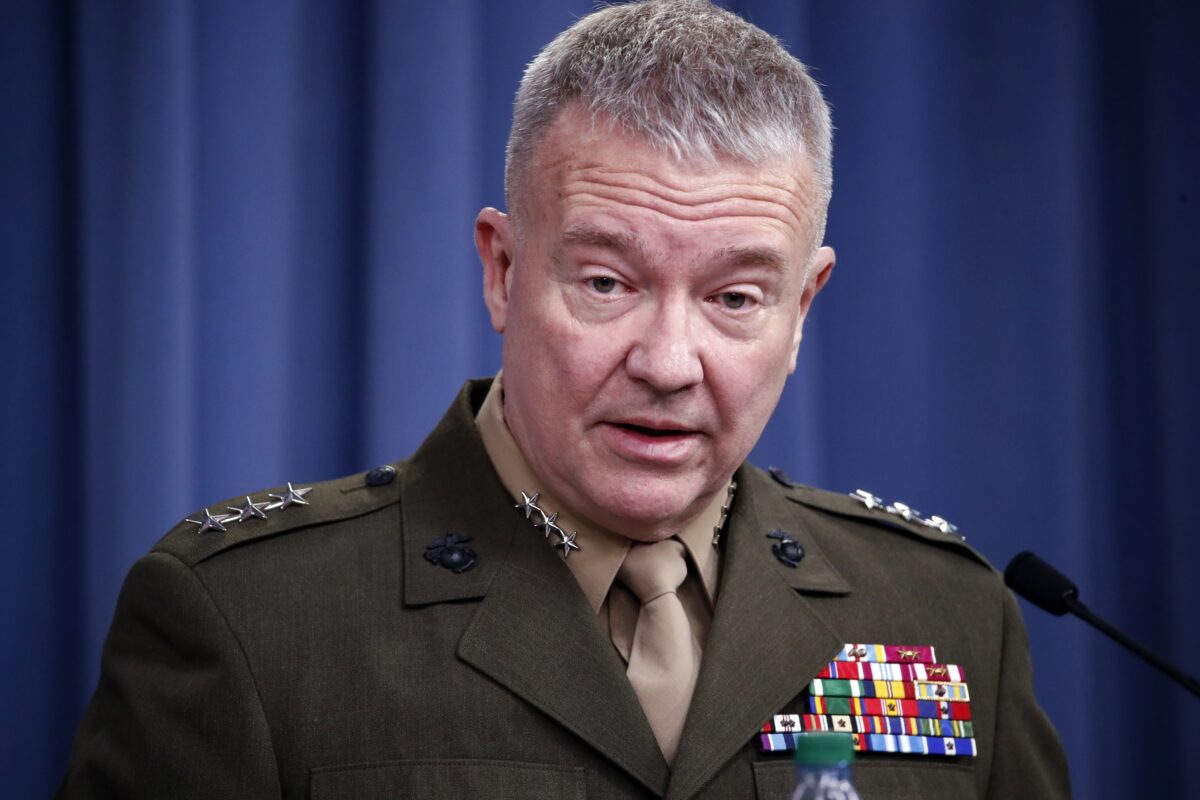 WASHINGTON—Afghanistan’s military “will certainly collapse” without some continued American support once all U.S. troops are withdrawn, the top U.S. general for the Middle East told Congress Thursday. Gen. Frank McKenzie also said he was very concerned about the Afghan government’s ability to protect the U.S. Embassy in Kabul.

McKenzie, head of U.S. Central Command, said that as the United States pulls out all forces, “my concern is the Afghans’ ability to hold ground” and whether they will able to continue to maintain and fly their aircraft without U.S. aid and financial support. Later, at a Pentagon news conference, McKenzie said the United States will look for “some remote, televised way” to help the Afghan security forces perform maintenance on their aircraft without having U.S. personnel in the country.

“We’re certainly going to try to do everything we can from distant locations to assist the Afghans as they maintain the aircraft and other platforms that will be essential for the fight ahead of them,” the general said. He added later: “We’re going to try all kinds of innovate ways. The one thing I can tell you is, we’re not going to be there on the ground with them.”

In his testimony, McKenzie said it will be paramount to protect the U.S. Embassy and “it is a matter of great concern to me whether or not the future government of Afghanistan will be able to do that once we leave.”

McKenzie has spent the week detailing to lawmakers the steep challenges facing the U.S. military as it moves to withdraw all troops from Afghanistan by Sept. 11, as ordered by President Joe Biden last week. Walking a careful line, the general has painted a dire picture of the road ahead, while also avoiding any pushback on Biden’s decision.

U.S. officials have made it clear that military commanders did not recommend the full, unconditional withdrawal that Biden has ordered. Military leaders have consistently argued for a drawdown based on security conditions in the country, saying that pulling troops out by a certain date eliminates pressure on the Taliban and weakens U.S. leverage in the peace talks with the group.

In public and private sessions with lawmakers, McKenzie has been pressed about how the United States will maintain pressure on the Taliban and prevent terrorist groups from taking hold in Afghanistan again once the United States and its coalition partners leave. The United States has more than 2,500 troops in the country; the NATO coalition has said it will follow the same timetable for withdrawing the more than 7,000 allied forces.

He told the Senate Armed Service Committee on Thursday that once troops leave the country, it will take “considerably longer” than four hours to move armed drones or other aircraft in and out of Afghanistan to provide overhead surveillance or counterterrorism strikes. He said it will require far more aircraft than he is using now.

Defense Secretary Lloyd Austin, speaking at NATO earlier this month, said the United States will continue to support the Afghans after the withdrawal. He said “we will look to continue funding key capabilities such as the Afghan Air Force and Special Mission Wing, and we will seek to continue paying salaries for Afghan Security Forces.”

Austin and others have said the United States  will maintain the ability to counter terrorists in Afghanistan, but there are few details, and officials say they have not yet gotten any diplomatic agreements for basing with any of the surrounding nations.

McKenzie has declined to provide details during the public sessions.

He said there are no decisions yet on what size of diplomatic contingent will be left at the U.S. Embassy in the Afghan capital, and whether it will include a security cooperation office. Those decisions, he said, could reflect how the United States ensures the defense of the embassy. Marines often provide security at other embassies around the world.

Sen. Jeanne Shaheen (D-N.H.) said there are concerns that a U.S. withdrawal will create a vacuum in the country that China, Russian, or Iran will fill. But Sen. Elizabeth Warren (D-Mass.) argued that the United States presence in Afghanistan over the past 10 years has not led to much improvement. She said the government is still corrupt and the Taliban control a larger portion of the country than it did before.

The total included more than 2,800 armed and unarmed private security contractors, of which more than 1,500 are armed. Of those 1,500, about 600 are Americans.