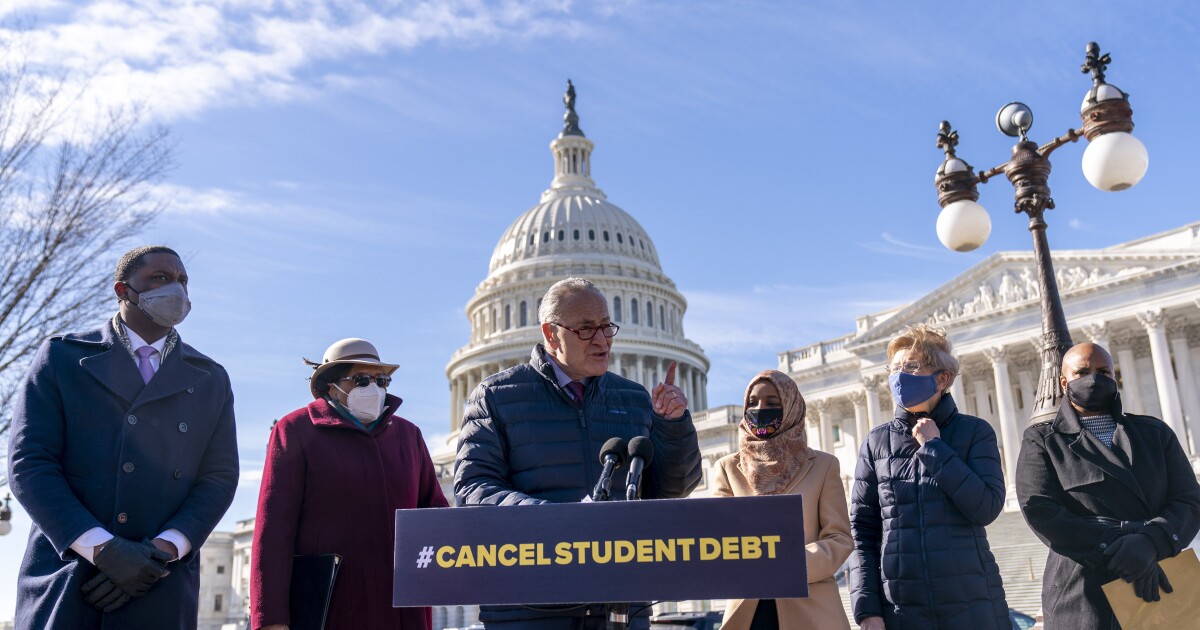 Democrats and far-left liberal groups know that a bill that would “cancel” student loan debt has little, if any, hope of making its way through Congress in the near future — even with Democrats firmly in charge of the House, Senate, and White House.

There are simply too many voters, especially blue-collar workers in historically blue-colored states, who have no interest in paying for the debt of those with high-priced college degrees to push through the sort of sweeping legislation desired by politicians such as Rep. Alexandria Ocasio-Cortez, a New York Democrat, and Sen. Bernie Sanders, a Vermont independent.

But since when has Congress’s failure to pass legislation ever stopped the far Left from attempting to achieve massive alterations of society?

Instead of passing a new law to cancel student debt, many congressional Democrats and liberal groups are calling for the Biden administration to take a completely different approach. They argue that the Biden administration can indefinitely “freeze” most federal student loan payments, effectively canceling the debt without actually eliminating it.

In a letter sent to the Biden administration on June 23, more than 60 congressional Democrats demanded that President Joe Biden continue to allow borrowers, regardless of income level, to avoid having to make payments on most kinds of federal student loan debt.

“Specifically,” the letter reads, “we ask that you extend the pause by at least six months — until March 31, 2022 — or until the economy reaches pre-pandemic employment levels, whichever is longer.”

In early 2020, in the wake of the emergence of the coronavirus pandemic, the Trump administration (followed by Congress, as part of the CARES Act) “temporarily” ceased requiring people with federal student loan debt to make monthly student loan payments. They also froze interest on student loan debt and collections as well.

At first, the Trump administration and Congress indicated the pause on student loan payments would only last a few months, but former President Donald Trump extended the freeze, which was set to expire in September 2020, to early 2021. Then, on Biden’s first day in office, he too extended the pause, this time until September 2021 — despite the fact that a coronavirus vaccine had already been developed and economies were beginning to open up.

Because of the decisions made by Trump, congressional Democrats, and Biden, about 41 million federal student loan borrowers (including millions of people who did not lose employment because of the pandemic) have automatically had their student loan payments frozen, without any penalties.

If the Biden administration agrees with the move, student loan borrowers will, at the very least, be permitted to avoid making payments for more than two full years by the time that the deadline of March 31, 2022, passes.

A much more likely scenario, however, is that borrowers won’t be required to make payments for much, much longer than the suggested six-month extension, because it’s highly unlikely that the United States will reach “pre-pandemic employment levels” in the near future. In fact, it could take decades before the U.S. fully recovers.

According to data from the Bureau of Labor Statistics, the seasonally adjusted unemployment rate in January and February 2020, the two months prior to the start of the COVID-19 lockdowns in the U.S., was 3.5%. Prior to September 2019, the last time that the unemployment rate was that low was in 1969.

The odds that America is going to quickly return to historically low unemployment levels within the next few years are slim, to say the least. And the odds are even lower that borrowers will tolerate being required to restart their student loan payments, which for some cost $1,000 per month or more, after several years of a “pause.”

Democrats are using the opportunity presented by the pandemic to “cancel” student loan debt without passing legislation, and the rest of the country is going to end up stuck with the bill — either through higher taxes or inflation caused by government printing money to cover the costs.

I wish I could report that the Biden administration is planning to rebuke congressional Democrats’ reckless proposal, but there is absolutely no evidence suggesting it will. In fact, Biden’s Secretary of Education Miguel Cardona noted during a Senate committee hearing held earlier in June that the administration is considering yet another extension of the payment pause.

Will America ever return to fiscal sanity? It’s looking less likely by the day.

Justin Haskins ([email protected]) is a research fellow at the Heartland Institute and the director of Heartland’s Stopping Socialism Project.